Critics of 1689 Federalism often caricature baptists as claiming to know who the elect are. This does not follow from any 1689 Federalism belief. We agree with the reformed “judgment of charity.” Based upon a credible profession of faith, we judge (with charity) a person to be saved. The only difference is that we do not believe that being born to a professing parent is sufficient warrant to charitably judge a person to be saved.

The following is a rather revealing Twitter conversation demonstrating 1) that there is nothing radical about baptists on this point, and 2) that some (many?) paedobaptists haven’t really thought through this issue.

AKA: Why I am not a baptist. 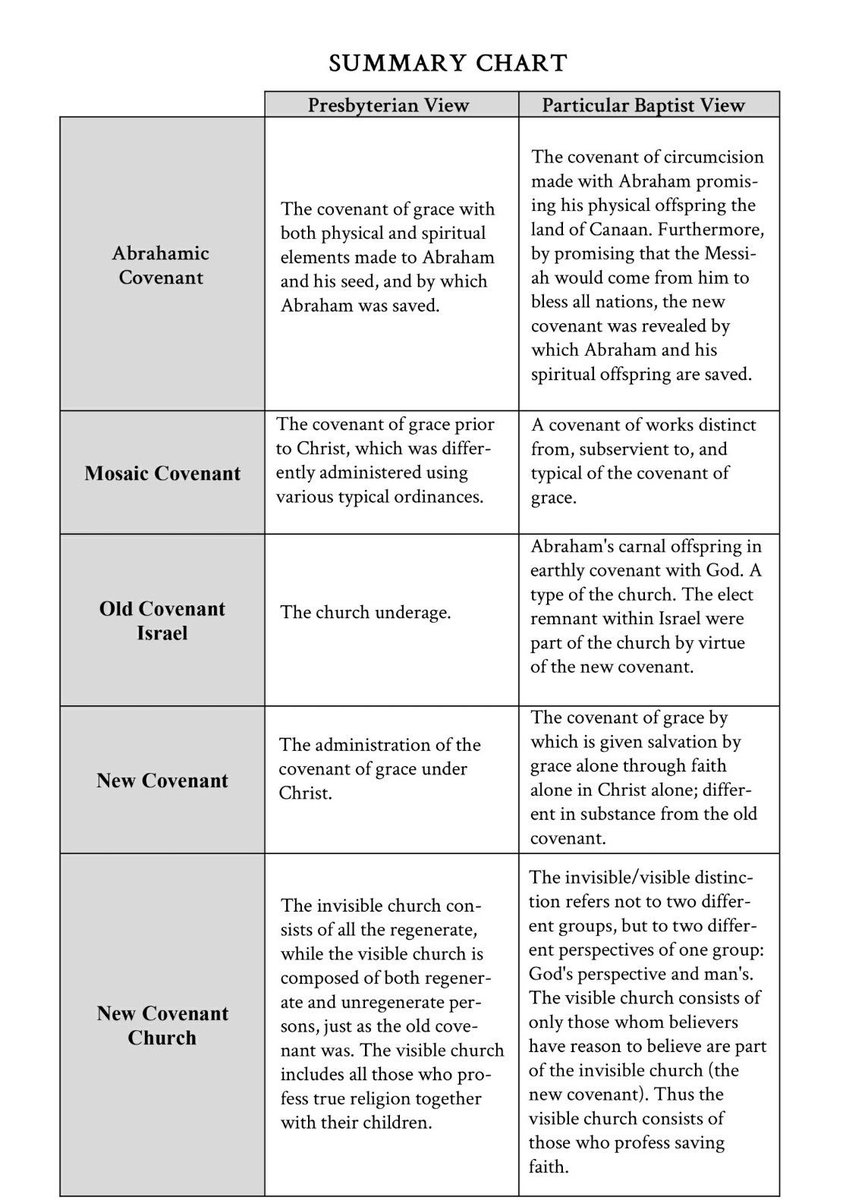 Notice in the final row where Denault explains the need to discern who is in the invis church to identify the visible. This isn’t a strawman

Discern = judgment of charity based on a credible profession of faith. No different from paedo for those “of age.”

a credible profession isn’t how we determine who is part of the visible church “of age”, it’s just what we ask before baptizing them into it

I’m sorry, can you restate? I don’t know what you are saying

I’m sorry, you’re really confusing me. Can you please clarify?

Maybe you can tell me what you aren’t getting.

Everything you’ve said in the above replies. How do you think the reformed identify the visible church?

via baptism, WCF 28.1 “Baptism is …not only for the solemn admission of the party baptized into the visible church”

I’d have to look at what they intended by it, but I assume “professing christian” would include baptised.

However, what a thing is, and how you identify a thing are not the same thing.

What role does a credible profession of faith play, in your understanding?

It’s a means to determine if someone outside the covenant is serious about entering into it.

It wouldn’t make sense to baptize someone into the church who has no real interest in joining.

So credible profession just means “Wants to join the church”?

with all that entails, yes.

What is required for someone to be a communicant member?

For someone to be made a communicant member they have to publicly profess their faith and be baptized.

OPC DPW IV.B.1 says they must “give evidence of conscious saving faith in Christ.” Do you agree?

Ah, you’re talking about someone who is already a member. Yes, but this wouldn’t make them any less a church member.

It’s a protection against judgement for misusing the supper.

How does it protect? What would be misuse?

Eating or drinking without discerning the body, because of sin.

Sin in this instance would be lack of saving faith?

that could be an example, though I don’t think it’s the only one.

Does the public reception into full communion entail a judgment of charity that the person has “conscious saving faith in Christ”?

I think that’s fair, otherwise, what’s the point of fencing the table

…but that they have some sin that requires repentance. The Q isn’t about regeneration. The only time it /might/ be is excommunication.

Does judging a person to have saving faith mean judging that they are regenerate?

It seems to me this is exactly the problem I was pointing out, you really want this to be about something invisible, and behind the scenes.

I’m saying that it isn’t, and a judgment of charity is exactly the kind of thing you use when you *don’t* know.

Ben, I honestly think you’re unnecessarily pushing yourself into a weird corner in this thread, becoming a polar opposite without good cause

Maybe so, my original point was, and remains that trying to ‘see’ the invisible church to identify the visible isn’t helpful.

Reconstructing the vis kirk w/ infant inclusion as primary deconstructs the system & is source of unnecessary polarizing to ur own hurt.

Isn’t that what Denault says in the chart though?

He says visible = ppl we have “reason to believe” are in invis. It’s not speculation or stating absolutes to connect prof of faith to regen

Would you say that Ref/Pres do the same thing, but just with different standards for ‘reason to believe’?

What do you think the different standards are?

For instance, a person might say that being born in a christian home *is* reason to believe they are in the invisible church.

In that case, you’d say baptists and ref’d are baptizing for the same reason.

This gets hairy because of disagreement about presumptive regeneration. But in that case, yes (see Utrecht 1905 Synod for example)

Yeah, personally, I’m not a fan of answering the regeneration question at all, as you could probably tell from my answers.

promise that was signified and sealed unto you in your infancy by holy baptism.” To receive prof of saving faith = to judge regenerate.

Ben, can you acknowledge 1689 Fed view does not require “regeneration goggles”?

I don’t think I used those words in this convo, I think there is an over-emphasis on the invisible, but only use that phrase in jest.

Nor do I think baptists think they know who the elect are.

To clarify your view: how can you judge someone to have saving faith without judging them to be regenerate?

I received no reply to the last question, so I asked it again 2 days later.

To clarify your view: how can you judge someone to have saving faith without judging them to be regenerate?

I received no reply, so I asked again 2 days later. And again 2 days after that. I asked 4 times over the course of a week and was never given a reply.

Note this statement from an 1857 issue of the Princeton Review

And this statement from Hodge in an 1858 Princeton Review.

In sum, there is nothing radical about 1689 Federalism’s view of church membership.

For more on this, see