That the Church is a visible society, consisting of the professors of the true religion, as distinguished from the body of true believers, known only to God, is plain, they say, because under the old dispensation it was such a society, embracing all the descendants of Abraham who professed the true religion, and received the sign of circumcision… The Church exists as an external society now as it did then; what once belonged to the commonwealth of Israel, now belongs to the visible Church. As union with the commonwealth of Israel was necessary to salvation then, so union with the visible Church was necessary to salvation now. And as subjection to the priesthood, and especially to the high-priest, was necessary to union with Israel then, so submission to the regular ministry, and especially to the Pope, is necessary to union with the Church now. Such is the favourite argument of Romanists; and such, (striking out illogically the last clause, which requires subjection to prelates, or the Pope) we are sorry to say is the argument of some Protestants, and even of some Presbyterians.

It is to be remembered that there were two covenants made with Abraham. By the one, his natural descendants through Isaac were constituted a commonwealth, an external, visible community. By the other, his spiritual descendants were constituted a Church. The parties to the former covenant were God and the nation; to the other, God and his true people. The promises of the national covenant were national blessings; the promises of the spiritual covenant, (i.e. of the covenant of grace) were spiritual blessings, reconciliation, holiness, and eternal life. The conditions of the one covenant were circumcision and obedience to the law; the condition of the latter was, is, and ever has been, faith in the Messiah as the seed of the woman, the Son of God, and the Savior of the world. There cannot be a greater mistake than to confound the national covenant with the covenant of grace, and the commonwealth founded on the one with the Church founded on the other.

When Christ came “the commonwealth” was abolished, and there was nothing put in its place. The Church remained. There was no external covenant, nor promises of external blessings, on condition of external rites and subjection. There was a spiritual society with spiritual promises, on the condition of faith in Christ. In no part of the New Testament is any other condition of membership in the Church prescribed than that contained in the answer of Philip to the eunuch who desired baptism: “If thou believest with all thine heart, thou mayest. And he answered and said, I believe that Jesus Christ is the Son of God.” (Acts viii. 37)

But if we’re talking about infant baptism, then things change…

Our written constitution, so to speak, dates from the father of the faithful. God made a covenant with Abraham… The covenant was the covenant of grace and the parties were Abraham and those whom Abraham represented… Infants are in this sense members of the Church, because circumcision was a sign and seal of the covenant of grace… It is said that it was the seal of the national covenant made with Abraham; that it was intended to mark the nationality of his descendants, and to secure their interest in the national promises made to the patriarch… It has already been proved that the covenant of God with Abraham in reference to Christ was the covenant of grace and that circumcision was a seal of that covenant. 1. Because no man could be a Jew without professing to embrace the covenant with Abraham which referred to Christ. The Bible does not distinguish two Abrahamic covenants… That circumcision was the badge of this covenant in its spiritual, as well as in its temporal aspect, is obvious, because the two were united as the soul and body in man… No man could be circumcised with exclusive reference to the national covenant. He could not enroll himself among the children of Abraham, and claim as one of his descendants a part of the national inheritance, without at the same time entering into covenant with God… By being a Jew, he professed the whole Jewish faith… No man was ever circumcised in obedience to the command given to Abraham who did not thereby profess faith[.]
The Church Membership of Infants (1858)

Hodge cannot have his cake and eat it too. He must pick one or the other. 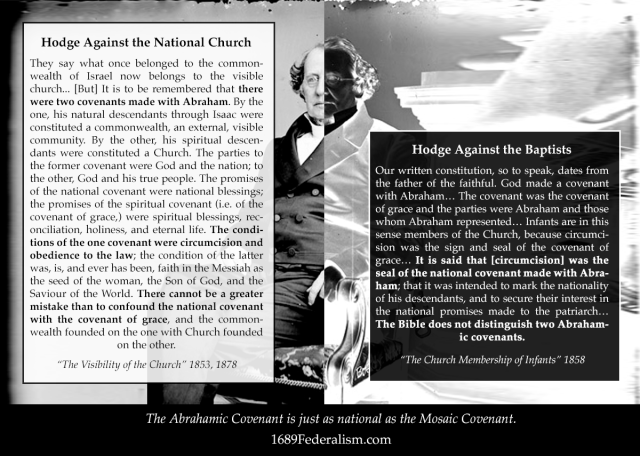 One thought on “Dr. Jekyll and Mr. Hodge on the Abrahamic Covenant(s)”