Here is a quote from the introduction to Abraham Booth’s The Kingdom of Christ. You can find more quotes/excerpts from this Evernote link.

This mistake of the Jews, respecting the kingdom of the Messiah, lying at the foundation of all the opposition with which they treated him, and of their own ruin; it behoves us to guard with diligence against every thing which tends to secularize the dominion of Christ : lest, by corrupting the Gospel Economy, we disho 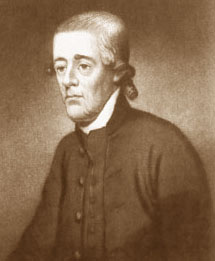 nour the Lord Redeemer, and be finally punished as the enemies of his government. Our danger of contracting guilt, and of incurring divine resentment in this way, is far from being small. For we are so conversant with sensible objects, and so delighted with exterior show, that we are naturally inclined to wish for something in religion to gratify our carnality. Under the influence of that master prejudice, the expectation of a temporal kingdom, Jewish depravity rejected Christ; and our corruption, if we be not watchful, may so misrepresent his empire, and oppose his royal prerogatives, as implicitly to fay, ” We will not have him to reign over us.”*

* “As the great source of the infidelity of the Jews was a notion of the temporal kingdom of the Messiah, we may justly say, that the great source of the corruption of Christians, and of their general defection, foretold by the inspired writers, has been an attempt to render it, in effect, a temporal kingdom, and to support and extend it by earthly means. This is that spirit of Antichrist, which was so early at work, as to be discoverable in the days of the Apostles.” Dr. George Campbell’s Four Gospels Preface, p Iviu Second edition

2 thoughts on “Abraham Booth’s “The Kingdom of Christ””